Another birthday, another year older, another country…

I have spent part of today reflecting on some of the memorable birthdays I have had living overseas. I don’t recall all of them but a few definitely stand out.

When I was in Singapore, my birthday was usually during our October break and several years the Asian Gaelic Games were also around that time. I spent my first overseas birthday alone in Shanghai in the days leading up to my first AGG. I recall walking down a street of big lit up shops when my mobile phone rang. However memory is a funny thing and I don’t recall who it was.

Another year I was in Penang, Malaysia (again for the Gaelic games). Ingrid and I spent the week before hiking in Taman Negara but happily moved our muddy selves into The Traders Hotel where the teams were staying. The hotel staff delivered a birthday cake and card to our room!

I celebrated my 40th birthday with dinner at Friends Restaurant in Phnom Penh, Cambodia followed by drinks at the Foreign Correspondents Club. I was there with a group of colleagues on a Tabitha house building trip.

I recall going out for high tea for one Singapore birthday as well as one where a group of us explored Haw Par Villa. (Nothing quite like experiencing the 10 Courts of Hell…) 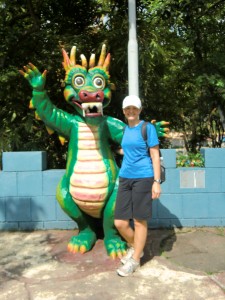 When I was in Tanzania, I celebrated my birthday part of the way up Mount Kilimanjaro. When the cook found out it was my birthday, he cut carrot and green pepper into letters spelling out “Happy Birthday” that were placed on a platter of rice. (Unfortunately I don’t have a copy of the photo on my computer but I do have a printed version in a box somewhere…)

One of my birthdays in Switzerland, my niece and nephews in Canada recorded a special birthday message for me.

And on another, a friend made me flambéed bananas with ice cream (and rum). 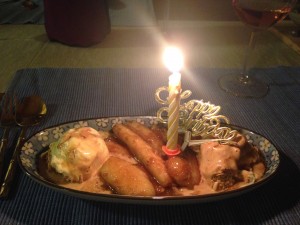 I wasn’t expecting much of this birthday as I hadn’t said much to anyone about it nor had I made any special plans. However (thanks to Facebook), my landlord and his wife found out and surprised me with flowers and chocolates. 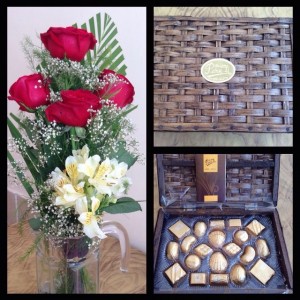 I also received texts, calls, emails, posts and messages all of which have left me feeling very loved in spite of being very far away. Mwah!