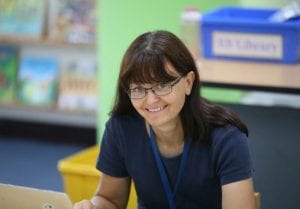 Back in August 2008 (!!!) when I started my first school year as a teacher-librarian, my mentor told me that I now had the best job in the school (or possibly the world) but that I shouldn’t tell people because then they would all want to be librarians too. I’m sorry, Lisa, but I suck at keeping secrets and I need to shout it from the rooftops right now.

I HAVE THE BEST JOB IN THE WORLD!

Last week staff was back at school (students come back tomorrow). Two new and two returning staff kids spent most of the week in the Elementary Library. One of the new students is going into grade six so she will be in Secondary. On Friday, she checked with me to make sure that she will be allowed to borrow books from the ES Library even though she will be a middle schooler. I reassured her that students can borrow from any of our three libraries. She then told me that the ES Library is the best library she has ever been to in her life!

On Friday morning, new students and their parents were invited to come to school for an orientation session. After introductions in the gym, they toured the school. The library was part of the tour and I told the parents and students that they were welcome to borrow books before they left. Several took me up on the offer and amazingly I had all of the authors and titles that they were looking for! (Including Dork Diaries, Dog Man, Ghost by Jason Reynolds, Andy Griffith’s Tree House series.) It made staying late one-night last week to create library accounts for the new students completely worth it.

I was also visited by a mother who has a child already at the school and another starting. She wanted to let me know how much she and her daughter appreciate our library collection and my book recommendations. Another older sibling who gave me a big hug when she came around with her younger sister.

I’m so excited for the first day of school on Monday and the chance to reconnect with all my returning readers!

This year is going to be busy (as they all are) especially as we are starting the school year with one of our library team members covering some classes for a teacher on medical leave. There will be long days and long lists of things to do. I will get tired and frustrated by the lack of hours in a day. At those times, I need to come back to this post and remind myself that no matter how hard it gets, I really do have the best job in the world.

2 thoughts on “The Best Job in the World”