Last weekend, my landlord’s father passed away. He had Parkinson’s and was frail but it was still a shock to the family when he was discovered to not be breathing and though they called an ambulance, they were unable to resuscitate him. Earlier this week, the godmother of one of my co-workers was in the hospital (I don’t know the details) but she didn’t make it. I know it is just coincidental that I know two people who have lost someone in the same week but I am reminded of life in Tanzania where it seemed there was always someone on staff at the school who had just lost a family member. It was a large staff but many of the people who didn’t make it were young people  – a young wife, a young child, a sister. It made me very aware of living in a country with a lower life expectancy.

This morning, my colleagues and I piled into a taxi and went to the home of our co-worker’s godmother to pay our respects. We took a floral arrangement. When we arrived, we went into the house. It was a large house with lots of wood. It looked to me like an old house that had been well taken care of. (I didn’t take any photos because it seemed disrespectful.) The coffin was at the end of a long room that I think was usually both the dining room and living room. It was surrounded by flowers to which we added the ones we brought. The furniture had been moved out and chairs were set up along the edges. We greeted the family members of our colleague – her mother and a sibling and then took seats. Other people were sitting closer to the coffin. People came and went. Some were checking their phones. One couple were reading the newspaper. Our colleague came out from another part of the house to greet us and then went back and later came out with a tray of drinks for us. We stayed for about 30 minutes and then said goodbye to our colleague and her mother.

By this time it was nearly noon so people were heading home in different directions. One of our interns needed to take a poster to a university career fair and spend some time at the booth for her faculty (psychology) and the other intern and I decided to tag along.

The University of Saint Francis Xavier in Sucre was founded in 1642 making it one of the oldest universities in the world and the second oldest in the Americas (at least according to Wikipedia). Each career had stall with displays and pamphlets. 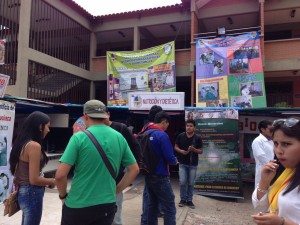 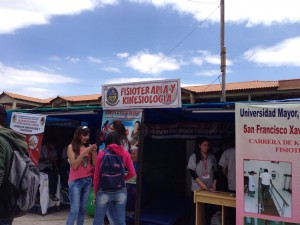 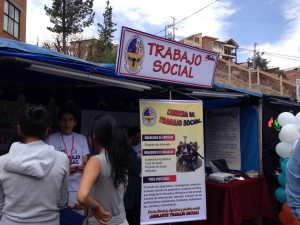 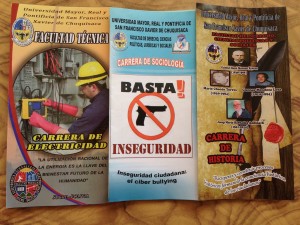 I managed to collect only three pamphlets. The stalls were spread out across a large area both in a covered sports hall and between it and the economics building. We wandered from stall to stall and also stopped to watch the psychology group put on a skit. 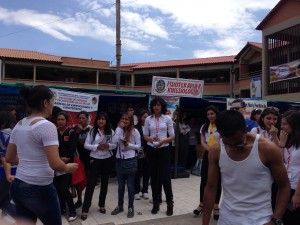 The students were very eager to share about their departments and to show off their displays. I walked home for lunch contemplating the circle of life. People at the end of theirs juxtaposed with young students just beginning their adult life.