I got up really early on Tuesday morning (was that only yesterday?!?), finished packing, made some sandwiches, gulped a cup of tea and at 5:15 am, as instructed by Roxana, I called a taxi. Thankfully she had given me two numbers to try because no one answered when I called the first one. I told the operator where I was and where I needed to go, picked up my backpack and headed out to street. There was cab pulling up as I did so. It seemed awfully quick so before I got in I asked if he was the one I called. He said he was so I hopped in. He then asked where I was going and radioed in my answer (using a radio that resembled the walkie talkies we took out on duty when I taught in Ottawa). I texted Roxana to let her know I was in a taxi. About ten minutes later, the taxi driver said we had arrived at the place I wanted to be. There were several mini-buses loading up as well as food stalls along the side of the road. I couldn’t seen any sign of a bridge in spite of apparently being at the first bridge on the way to the airport but one of the food ladies told someone else that was where he was so I just waited. A woman approached and asked where I was going (I assume because she wanted to sell me the bus ticket). I explained I was waiting for a friend. Eventually Roxana showed up and apologized. She hadn’t been able to get a taxi via telephone and had to resort to one down in the street. She had a glass of tohorí (the hot, chunky corn drink) and offered me one but I declined.

Around 6:15 am, our ride pulled up. It was the principal of the school in Maragua along with two teachers. The teacher in the front seat has her toddler on her lap. The teachers at the school are all from Sucre. They leave for Maragua early Monday morning and return to Sucre Friday afternoon. With financial help from Japan, a new school was built beside the old school about 5 years ago and some of  the old classrooms have been converted into accommodation for the teachers.

The trip to took a bit over 2 hours. The road started out paved, then paved with stones, then gravel and finally dirt. It was windy and we basically went up and over a mountain. The scenery was gorgeous. We went through a pine forest (apparently a reforestation project), a eucalypt forest and then started down. The earth was amazing colours – red, green, purple, yellow – but I was in the middle of the backseat and couldn’t get any photos.

We arrived in Maragua around 7:40 am and agreed to meet the director in his office at 8 am. (photo) We then headed to the guest house down the road, dropped off our bags and went to find Don Basilio (Don is title of respect), who lives next door and runs it. No one at his house knew where he was so we left a message and headed to school. 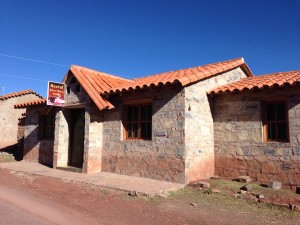 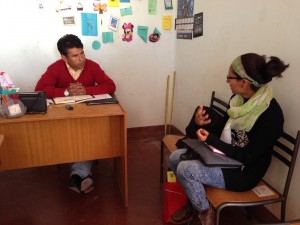 There was then a full school assembly which consisted of the student lining up at the flagpole in their classes, one behind the other – both primary and secondary students. A teacher spoke about it being the birthday of Sucre, some students recited poems and other sang. It was hard to hear anyone and the students were fidgety and chatty. 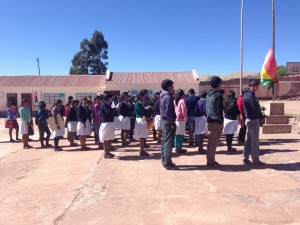 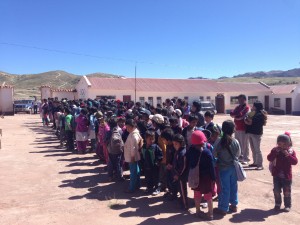 After we headed to the library which was in quite a state – dirty, littered and books out of order. With the students, we managed to pull all the books and other materials (games, art supplies, musical instruments etc) off the shelves, rearrange the shelves, clean them, inventory the books and put them back on the shelves. It took all morning and I did have to remind the students at one point that they were there to work not to play the instruments or do puzzles. There was a break at 10:30 am when the students went and had their school breakfast – bread and some white cloudy drink that I didn’t ask about. (I had one of my sandwiches.) At some point, Don Basilio stopped by and gave us the key to the guesthouse. 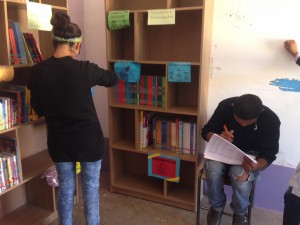 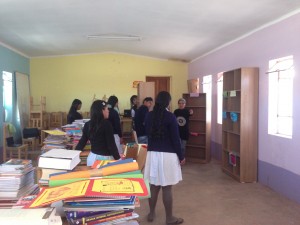 Around 12 the students left to get their school lunch. Some of the mothers come to cook lunch but the students have to bring their own bowl and spoon – and many seemed to have forgotten their spoon. At 12:30, Roxana and I headed back to the guesthouse to have our lunch. The guesthouse has a “kitchen” with two gas burners at one end and some odd dishes and cutlery. 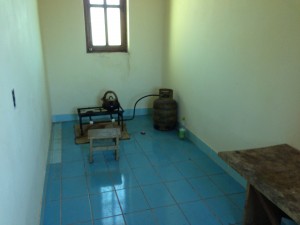 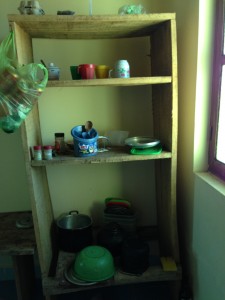 There is a laundry sink outside as well as a covered area with a table. There are two bedrooms with 4 beds each, one bathroom (that did have a shower after all) and one single bedroom. It was set up in partnership with Condor Trekkers (who also run my favourite vegetarian café in Sucre) because they run hiking trips in the area. There were lots of foreigners passing through. Some stopped to have lunch, some stayed the night and a couple camped across the road (their guide stayed in the single room). I stashed my bag of food in the kitchen and we headed out for a walk to “La garganta del diablo” (the Devil’s Throat). We along the river and met up with the kindergarten class and their teacher who were carrying an assortment of bottles and jugs. They were heading to the river to get water for their plants. There was very little water in the river which was good because we had to cross it and then take a path down to the Devil’s Throat which is next to some waterfalls. 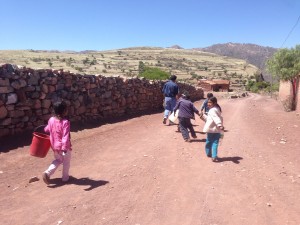 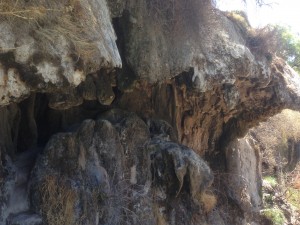 We spent a bit more time sorting things out in the library in the late afternoon and had everything ready by the time the staff showed up. Roxana gave a presentation, we gave the teachers some time to look at the games and then the principal worked with the teachers to create a timetable. They managed to schedule all of the primary classes and some of the secondary. 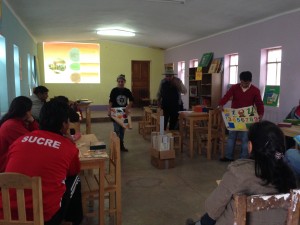 It was nearly 7 pm by the time the meeting ended and we got everyone out of the library. We headed to the boarding house down the road to sort out a schedule for the student librarians who keep the library open in pair from 5-7 pm Monday to Thursday. (This had been in place in the past but had stopped for some reason.) The boarding house was quite large but there are only about 20 or so students who live there.

When we got back to the guesthouse, we were exhausted and neither of were hungry which was good because there were lots of guests and Don Basilio’s wife was cooking for some of them. (We found Don Basilio having a nap on one of the other beds in our room…) Around the time I was heading to the bathroom, the power cut out. I grabbed my headlamp and wet wipes. (The showers heat the water by electricity and I wasn’t up for a cold shower in the dark.) We crashed early and didn’t get up until after 7 am. (The principal had told us we could get a ride back into Sucre the next day around lunchtime so we didn’t have to get up early and start walking.)

In the morning, we discovered that a teacher had dropped off dinner for us (bowls of rice and lentils) and they were sitting on the table, oops. When I went into the kitchen to grab my food, the bag and everything in it was gone! I was quite baffled but decided to check with Don Basilio later. Roxana had two bananas and we had some packets of biscuits that we were given to us the school so I ate a banana and biscuits. My bottle of coke was in my bag in my room so I decided to have some (I hadn’t brought tea bags with me). I went to open it and it exploded all over my pants and the floor. I cleaned up my pants as best I could and Roxana cleaned up the floor.

We tried to find Don Basilio but he had disappeared so we headed off on a hike to the top of a ridge which gave us great views of Maragua and the surrounding countryside. 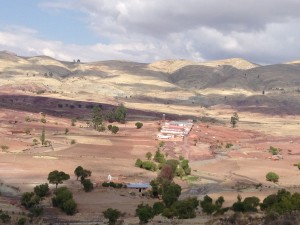 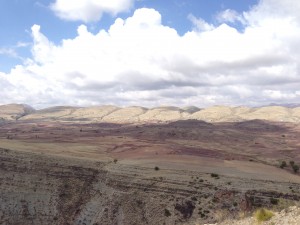 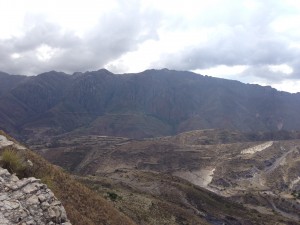 Around 11:30 am we went back. We found Don Basilio and told him about the missing food. He said he had heard dogs fighting and that he figured they got into the kitchen and took it. I explained that I didn’t really care about the food but that my Swiss army knife was in the bag. He wandered off into a ravine to look for the bag while Roxana and I shook our heads at his story. He didn’t find it and when Roxana went to pay for our night, he told her we didn’t have to pay because my stuff went missing (but we did anyway).

We headed back to the library and helped the kindergarten teacher show a film using his laptop and the projector in the library. I am a bit slower when the menus are all in Spanish but I was pretty sure I could fix the problem (his laptop screen and what was being projected were not the same window) and eventually I did. 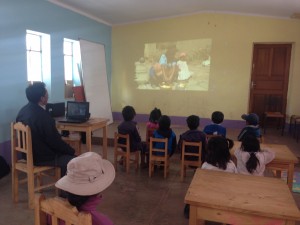 At noon, we closed up the library and sat outside where we could keep an eye on the principal’s car. A teacher came by and brought us a plate of food – a hard boiled egg, boiled potatoes, chopped up cucumber and tomato, spicy sauce and a piece of dried meat. I ate the egg, Roxana had the meat and we split the rest. A bit later another teacher brought us two bowls of the students’ lunch – which looked like a yellow dahl  but was actually made with wheat with bits of potato and the odd bit of veg and meat. We fed one bowl to an Argentinian hiker who had asked us about a store earlier and split the other one.

Shortly after 2 pm the principal came by and we loaded up for the trip back. This time it was only Roxana and I and I managed to get some photos. 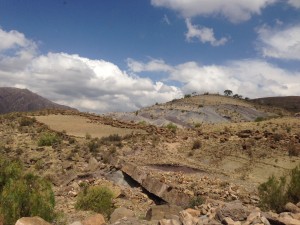 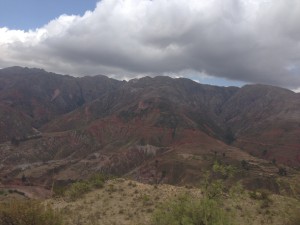 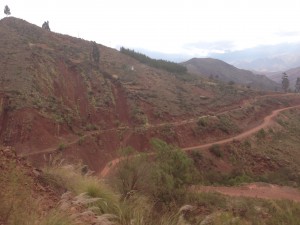 Tomorrow Roxana and I are taking a volunteer and her daughter to Sopachuy. It is a 6 hours bus ride and we are on a 9 am bus. I better go pack!