Last week, I was able to spend a day in our library in Yamparaéz with two American volunteers who are doing a special music project in several of our libraries. Kristen Ford is a singer/songwriter and she and her partner, Deirdre, are spending three months traveling in South America after spending 15 months touring all over the U.S.

We took a micro to the Parada Tarabuco (the Tarabuco bus stop in Sucre) and from there got on a minibus. The minibus will drop you off in Yamparaéz but charges the same as if you were to continue on to Tarabuco (10 Bs). Once the minibus was full, it departed. (It was full by Bolivian standards – one person per seat – but not by Tanzanian standards.)

I have a had a few conversations with foreigners and Bolivians alike about littering. There are signs around both prohibiting dumping of trash and encouraging good behaviour but they don’t seem to be having much impact. 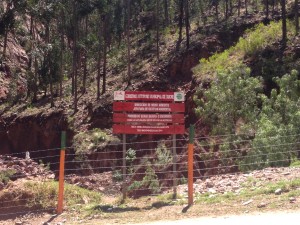 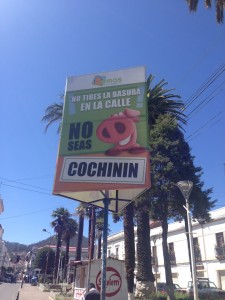 Unfortunately this sign on the minibus telling you to throw your rubbish out the window rather than on the floor of the bus seems to sum up the attitude of many people. 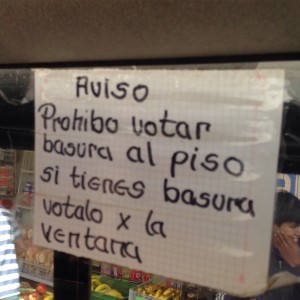 We arrived in Yamparaéz after about 30 minutes.

Kristen and Deirdre has spent the previous day there (with Silvia from BiblioWorks) promoting their workshops at the school. There was one secondary music class scheduled to come with their teacher before lunch and an open session for primary students in second grade in the afternoon.

We had a bit of time before the first group arrived so I took a look around the library. The non-fiction books are organized using a simplified Dewey system (numbers only and only to the tens place) and I smiled to see that the picture books been given the call number “1000”. 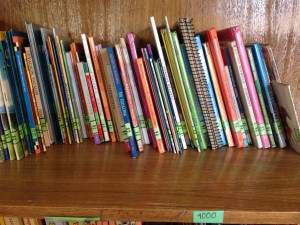 The secondary class didn’t show up right away for their session so Kristen and I went over to the school where we found them getting organized and they eventually made it to the library. After introductions and a bit of music, Deirdre read a picture book to the group “El ocaso” and then had the students generate a list of things that happen in the evening. Kristen used their ideas to create a song and the students joined in with various noise makers while she played the guitar and sang (and tried to get them to sing as well). The group was a bit timid at first but after the singing and some drawing, they warmed up a bit. 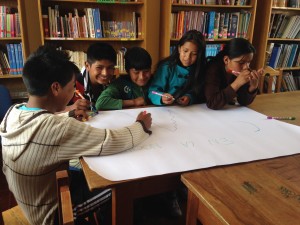 A few students were interested in trying out the guitar. 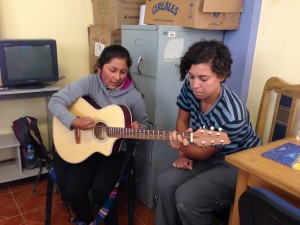 Then it was time for lunch. We stopped by the town hall ostensibly to use the washroom but also to check out the glyptodont fossil that is on display there. 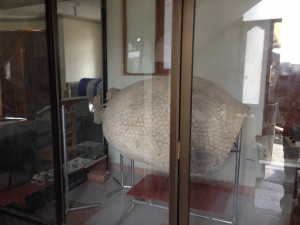 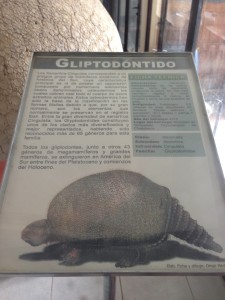 Then we headed to a park to eat our sandwiches (the day before the local lunch place had run out of food so we brought our own). There is a statue of a glyptodont in the middle of town. 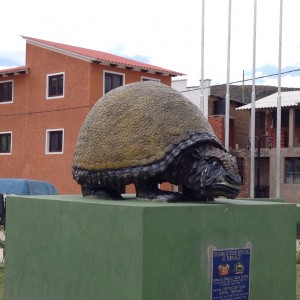 The afternoon group of younger students were more animated and involved in the singing. They too were interested in trying out the guitar. 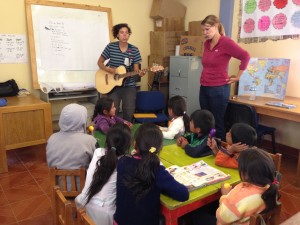 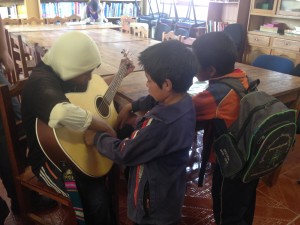 To return to Sucre, we headed out to the road and waited for a ride. The day before, Kristen, Deirdre and Silvia had gotten a lift in the back of a pickup but we were picked up by a guy in an SUV. He did a lap of town to collect more passengers and then we were off.

Kristen and Deirdre spent the rest of the week in Yamparaéz. Yesterday and today they have gone to the school library in Pampa Aceituno. Tomorrow afternoon, along with Maritza (the director of BiblioWorks) and a Canadian family of volunteers, we are heading to Villa Abecia for the official inauguration of BiblioWorks’ 12th library (it has already been open for nearly a year but the official ceremony has been delayed). We have chartered some transport for the 7 hour journey. Monday is a holiday (All Saints) so I am planning to go from Villa Abecia to Tarija and check out Bolivia’s wine region.