Yesterday evening, I wandered out to see what events were on offer as part of the Festival Internaciónal de la Cultura that is currently going on in Sucre. An online search had proved fruitless so I went by the Casa de Cultura to see if I could pick up a program. I didn’t see any so I checked the giant version and nothing took my fancy.

On the way home, I walked via a small plaza that has a theatre building at one end, Teatro Gran Mariscal. There were barricades around the end of the plaza facing it as well as some lights on platforms and a sound board set up. There were also some people milling around the entrance. I was curious about what might be going to take place so I sat on a bench to see what I could see. After a while I was joined by an older woman who asked if I knew what was going on. I told her I did not and she suggested I accompany her to find out. She seemed harmless so I decided to go along. First she wanted to buy some candy (and this being Bolivia someone with a cart selling various sweets was set up right by the entrance). She offered me some and I declined but she insisted I take one saying she had bought them for me. (I put it in my pocket.)

We went toward the entrance but then she decided we should sit on the bench for a bit longer. She introduced herself as Teresa and asked me a bunch of questions (including if I was married and if my hair colour was natural). She also shared that she was single but a 23 year old son. I am not good at ages but I think she looked like she was in her late 50s.

After awhile she decided we should try going into the theatre. No one stopped us and they were handing out programs. 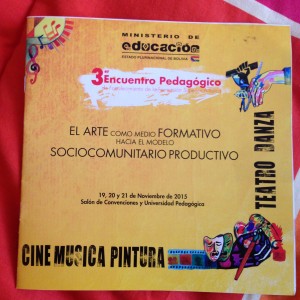 We went in and found seats in a box. I perused the program and discovered that we were at the closing ceremonies for a three day arts education conference. However the program said it was supposed to start at 6 pm and it was already after 7 pm… It eventually started around 7:30 pm and consisted of a variety of dance and musical numbers interspersed with the presentation of certificates or diplomas for people who had made a difference in various domains of art education (music, dance, theatre). They were calling them masters of arts but from what I understood they were honorary degrees (and most of the people receiving them looked like they had already had long careers). It all wrapped up about 10 pm. Teresa suggested we go for tea but I begged off and instead we exchanged phone numbers. I am not sure if I will hear from her again or not…