Over the past week or so, I have been invited by Maritza, the director of BiblioWorks, to take part in (or at least observe) a variety of events in Sucre.

On Friday 4 December (the day before International and National Volunteer Day), there was a special ceremony organized by CONAVOL-Chuquisaca (a chapter of the Consejo Nacional de Voluntariado) to recognize 60 volunteers from a variety of organizations in Sucre and other places in the department of Chuquisaca. Maritza was elected the vice-president of CONAVOL-Chuquisaca in September. They are working on laws to have volunteering officially recognized and valued. I was honoured to be selected for recognition for my work with BiblioWorks but even more pleased that a lovely young Bolivian, Ariane, was recognized for her work with Inti and the working children of Sucre. She comes from a family of means and has been surrounded by books and reading from a young age. On Friday afternoons, she joins BibliWorks staff and the Inti children in the plaza for storytelling and activities. She has also accompanied the children on excursions to various sites around Sucre. 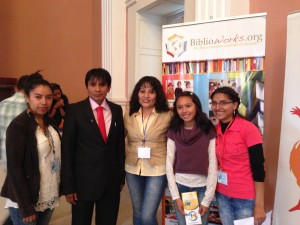 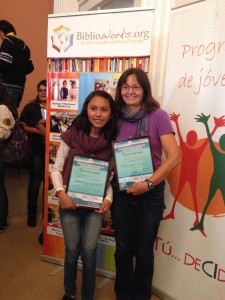 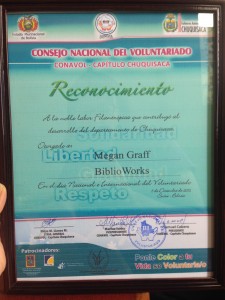 On Saturday 5 December, to celebrate International and National Volunteer Day, members of CONAVOL gathered in the main plaza of Sucre with a marching band and a floral arrangement. After a few speeches and some numbers by the band, we marched and danced our way around the plaza and then to a hall for refreshments. It was neat to be a part of one of the random groups of people marching and dancing in the streets that are regular occurrence here. 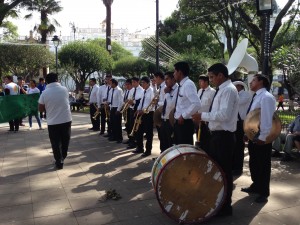 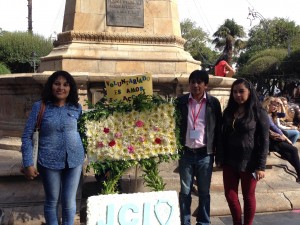 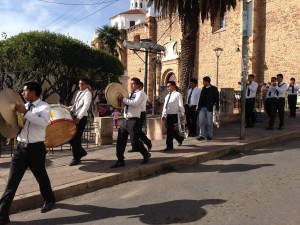 Every Tuesday afternoon, Maritza meets with a group who are working on laws to protect the rights of children in Bolivia. On Wednesday 9 December, there was third of four sessions being held to present the input of local children and youth. Maritza presented the ideas of the working children who sell Inti magazine in their own words. (The children themselves were not present because they were on an excursion organized by the canteen for working children which provides them with a free lunch each day.) They would like things like a bathroom in their house and a place to relax in the plaza after work. The country director for UNICEF (who happens to be from Korea) mentioned to Maritza afterwards that it was wonderful that she presented the children’s wishes in their own words. 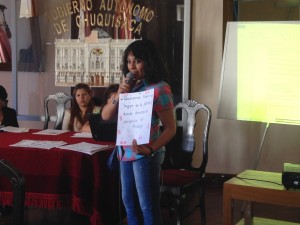 On Thursday 10 December, International Human Rights Day, I accompanied Maritza to the central plaza to meet with some others working on children’s rights. If I understand correctly, members of the press gather each morning in the plaza. We had copies of a press release which was shared with them and then they interviewed Maritza and others on the spot. There was other groups doing the same on a variety of topics. 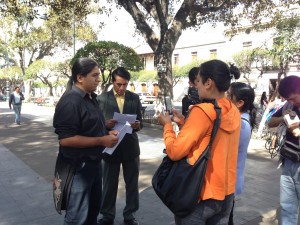 Out next destination was a ceremony organized by the Defensoría del Pueblo (Ombudsman). The Defensoría is a public institution charged with defending human rights. After a presentation recapping their actions during 2015, they recognized key players from several different organizations and then served hors d’oeuvres and wine (at 10:30 am!). 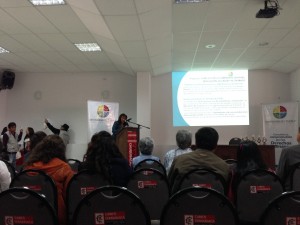 From there we headed to the Casa de la Libertad where there were more speeches (but no wine so we didn’t stay long). 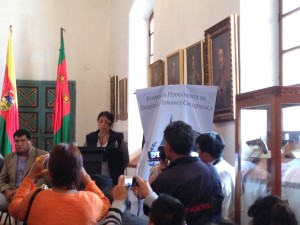 It is fascinating and a privilege to be invited to attend these events. Bolivia has room for improvement in many areas and it wonderful to see the dedication of Bolivians to bring about change.