In PYP schools, we talk a lot about action and in particular student initiated action. I had a brilliant session today with a class of grade 4 students during our first teaching block of the day that was an example of just that.

Before school I popped into their classroom to touch base with the homeroom teacher. (Due to a meeting of the upper elementary teachers, I see his class without him present.) I told him I was planning to share the picture book Four Feet, Two Sandals by Karen Lynn Williams & Khadra Mohammed. 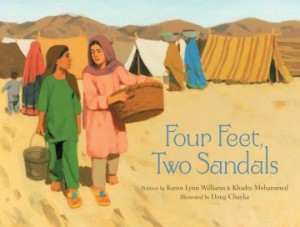 We agreed that in light of what is going on in the world, a picture book set in a refugee camp was appropriate. The teacher mentioned the recent meeting of President Obama and Alex, the six year old American boy, who wrote to him offering to adopt a young boy from Syria after he saw a photo of him in an ambulance and suggested I show the clip to the students as well. He also told me that some of his students were taking action to raise funds for technology for students in Kenya. He showed me their poster and I noticed the link for the image was from Kiva. A short discussion about micro-lending ensued.

I decided to start by showing the students the clip of President Obama and Alex. (I found it on the BBC website.) I had it set to fullscreen and projected on the wall as the students entered the library. 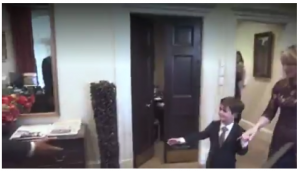 One student recognized it and said “I watched this. It made me cry.” We discussed different emotions that make you cry and then passed around the box of kleenex for anyone who wanted to be prepared. We watched it and then watched the following video which was of Alex writing the letter. 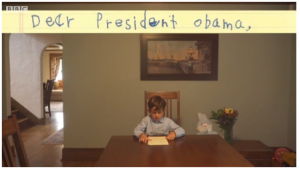 (I stopped it before the third video which was about Omran Daqneesh, the five year old Alex had seen in the news. I explained it showed the boy in the ambulance and I would show it to anyone who asked on my computer but I wasn’t going to project it on the wall.)

We then talked about action, refugees, and the war in Syria. I asked for more information about the fundraiser. We also talked about the difference between lending money to someone on Kiva and donating money. I talked about how I have made multiple loans with the same money on Kiva but that I also make donations to organizations and that one of those is UNHCR (The Office of the United Nations High Commissioner for Refugees,, also known as the UN Refugee Agency).

Then I read the book. More kleenex.

As the students went to select their library books, one of them came and asked the name of the refugee organization I had mentioned. I wrote it on a slip of paper for him. He showed it to the other students who are involved in the fundraiser and they spent some time discussing it.

There are some adults making a mess of the world but there are some amazing children who are working to make a difference already and I hope they get to be in charge when they grow up.

3 thoughts on “PYP Action (or Why can’t more adults be like these children?)”