This past weekend, my friend Ken (who has lived in Korea for a very long time) came to visit. Saturday we headed out on an adventure to find some dinosaur footprints and visit a dinosaur museum.

We started by taking the subway from my place to Busan West Bus Terminal (by the Sasang subway station). There we bought tickets for a 2 hour intercity bus ride to Sacheonpo. In Sacheonpo, we had some lunch and then took a local bus (bus 10) towards the Goseong Dinosaur Museum. The bus doesn’t run very often and it drove right by us at the bus stop but then it got stuck a red light trying to turn and we managed to get across the street and to the next bus stop before it. Phew. (If we had missed it, we could have taken a taxi.) Ken told the bus driver we wanted to go to the museum and when it was our stop the driver told us to get off and walk along the road. 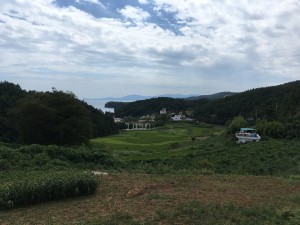 The view as we got off the local bus.

Once we were down at the beach, we discovered a boardwalk that followed the coast. It had interpretive signs in English and Korean and you could go down on to the rocks and walk around just like the dinosaurs did! (Except that they walked in mud hence the footprints.) 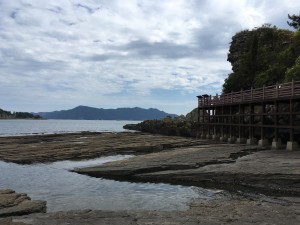 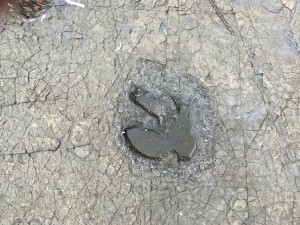 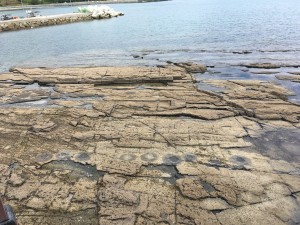 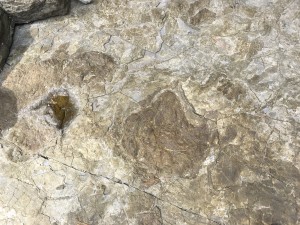 After walking the length of the boardwalk and stomping around the shoreline pretending we were dinosaurs, we headed up to the museum. Along the way there was a playground, topiary dinosaurs, dinosaur statues, a maze and gorgeous views out over the sea and islets. 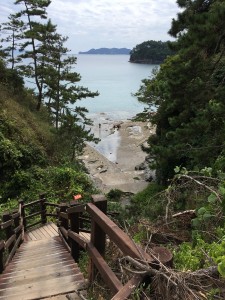 Heading up towards the museum. 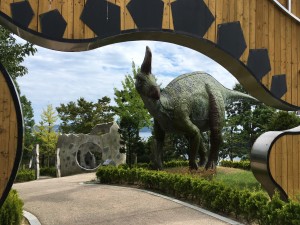 Dinosaur along the way.

The museum had very little English signage but it had fossils, skeletons, models and even some animatronic dinosaurs! (And the admission cost was only around $3.) 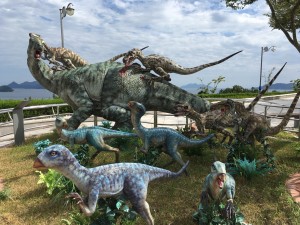 Gory scene outside the museum entrance.

After the museum we decided to walk along a different road back to the main road to catch the local bus. 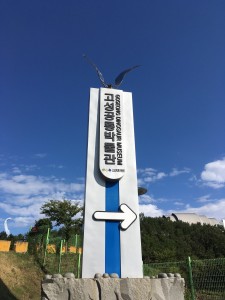 The sign for the museum from the parking lot. 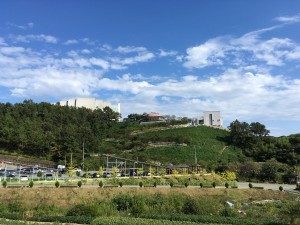 Looking back up at the museum from the road.

When we got to the bus stop, Google maps told us the bus wasn’t going to be along for awhile so we decided to start walking. We ended up walking all the way back to the bus station in Sacheonpo. We caught a bus back to Busan, found a yummy Indian restaurant near the bus station and then took the subway back to my house. 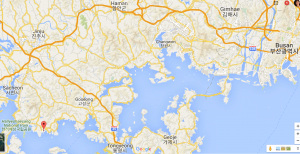 The red marker is the museum location.

I was impressed by how far we traveled in a day (and how easy Ken made it seem). The following day it poured rain but we managed to go to Changwon (on a bus from a different bus station that was less than a kilometre from where I live) to catch up with a friend of Ken’s who was showing some of his paintings in a cafe there. Thanks for coming to visit Ken. I hope you come back soon!