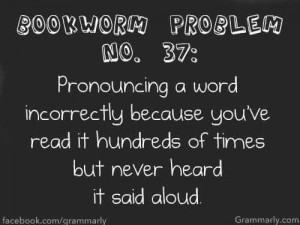 I learned to read before kindergarten but I just memorized whole words, I had no decoding skills. When I started grade one, most of the class did phonics work but since I could already read, while they were cutting and pasting words and syllables I had a different text and workbook (it was yellow and was called “A Duck is a Duck”, the second in the series was green but I forget the name – a Google search has come up with “Helicopters and Gingerbread”). Somehow I was able to read most anything but I couldn’t spell to save my soul. In third grade, I started to cry when I was placed in a high reading group – not because I couldn’t read the texts but because I didn’t know how to write the words to fill in the answers in the workbook. I managed to convince my teacher to move me down a level. (She was a very experienced teacher so now I’d like to think she was on to me but if so, she didn’t let on.) In fourth grade, my dad helped me study for my weekly spelling tests and I became a good speller.

We moved to Canada just before I started grade 5 and I was faced with some new spellings and pronunciations. I remember a spelling achievement test in grade 6 and being baffled when the teacher said “left-tennant” (interestingly the google doc spell checker knows what that is supposed to be…). Perhaps seeing my baffled look, she then said it was also pronounced lew-tennant. I heaved a sigh of relief but then realized I might not know how to spell the word but hey at least I had heard of it! (That teacher was also the first person I ever heard call the black and white stripy animals ze-bras rather than zee-bras though for a long time I was sure she was calling them zed-bras.) Going to school in Canada, I adopted Canadian spellings – colour, neighbour, mould, recognize, centre. Some of these were reinforced as I learned French and French also caused me to regularly misspell certain words – filtre, litterature.

Since I leaving Canada 10 years ago, I have been surrounded by English speakers from a variety of countries. This has had an impact on my vocabulary and also on my spelling. For the most part I stick to Canadian spellings but at some point my Google language setting ended up as UK English (I have just switched it back – interestingly for Gmail display language you can only choose between US English and UK English.) However even with it switched, Gmail is still insisting on UK spelling and as a slave to the red squiggly line, I usually give in.

This morning I went to write skeptical but wasn’t sure if I was spelling it correctly so I Googled it and it came up as sceptical. I did some further research later and realized it was one of those words. Apparently the k spelling is more common in North America. Suffice it to say that I am thankful for spellcheck but even then I have doubts about which spelling I should be using!

As for vocabulary, I discovered the “Not One-Off Britishisms” blog this morning and it seems to be that my use of English expressions that are not traditionally American won’t be as noticeable as they once would have been. Then again some of these “Britishisms” are also “Canadianisms” – ex. in hospital – and reading the index of entries, I would be hard pressed to tell you for many of them if I used them when I lived in Canada or if I have picked them up in the last 10 years…